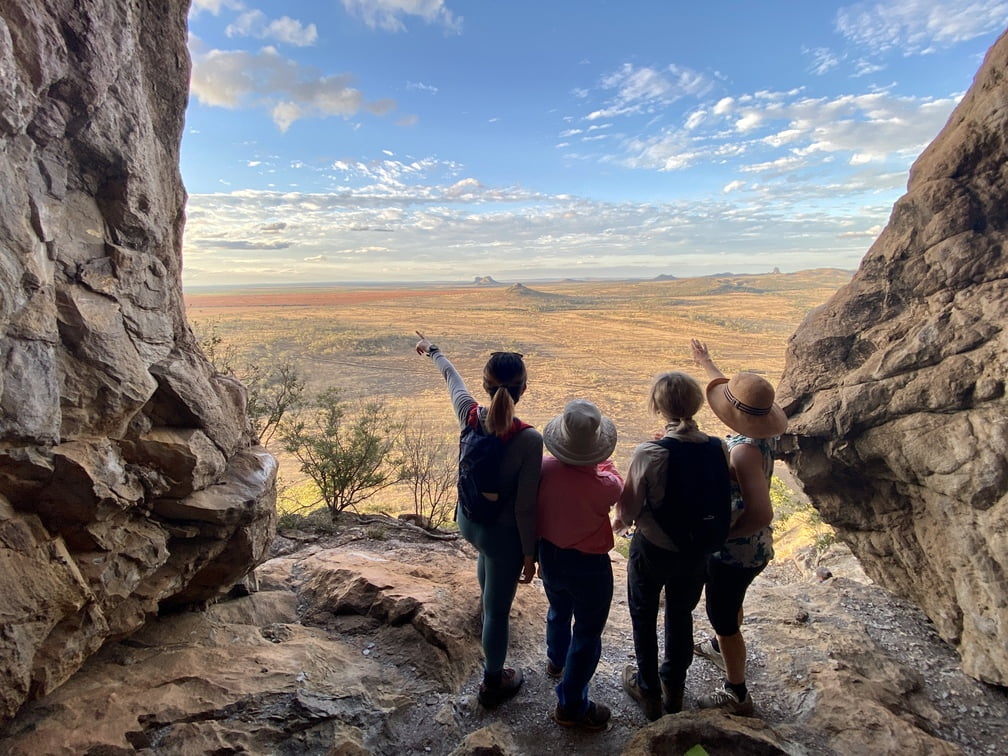 Located in the Briagalow belt Bio Region, 760 km northwest of Brisbane, the Peak Range is a chain of picturesque mountains between Moranbah, Clermont and Dysart. One of the most noticeable and impressive points of interest in the Peak Range National Park is Wolfang Peak. The peaks consist of intrusive volcanic plugs of resistant rhyolite and trachyte. Wolfang Peak is an isolated fang of rock with bands of grey and purple rhyolite showing the path of flow of basalt lavas.

We were lucky to have Kelly Shann along on this adventure who’s blog “Life Journey with Kelly Shann” is well known across regional and Central Queensland. Kelly’s work encourages others to “Be inspired to live your best life, as we learn through the stories of others”.

Kelly Shann has lived most of her life in the bush. She grew up on a Queensland cattle property with her father and sister, after losing their mother to a brain tumour when Kelly was 11 years old.

As a 5th generation agricultural producer, her love of animals and strong connection to the land was instilled in her from a young age.

One of the most valuable lessons Kelly learnt from her Mum was the power of kindness and putting others first whether they be human or animal. “We would come home from mustering after riding for hours in the hot sun and Mum always made sure we unsaddled our horses and gave them a drink before we reached for the water bottle ourselves!” She taught the girls that kindness would be returned tenfold, which Kelly is especially grateful for.

The girl’s father didn’t place a huge emphasis on formal schooling, however when Kelly was 18 years old, she joined the Miss Australia Quest (a fundraising initiative of the then Queensland Spastic Welfare League) which ultimately took her life on a completely different path when she was crowned Miss Queensland 1987. During those 12 months, Kelly travelled extensively both in Australia and overseas, promoting and educating the public about Cerebral Palsy.

In the following couple of years, Kelly worked at Channel Ten in Brisbane in a public relations role.

Her experiences during those few years were beyond anything she could have imagined for herself as a little girl growing up on an isolated cattle property. Kelly counts herself fortunate to have had such opportunities which she believes has helped shape her into the person she has become today.

It wasn’t too long though, before the bush beckoned to her and she left the bright lights behind to return to her father’s cattle property.  “I just knew deep down that I was meant to head home, and I’ve never regretted it – it’s who I truly am”.

Kelly now lives with her family on their cattle property and is grateful her children have had the opportunity with their own bush life experiences and have learnt to live their lives with empathy and kindness.

While her family are number one in her life, Kelly’s other great loves are her two schnauzers, Audrey and Adelaide, her horses and her garden.  The Shann family can often be found at a campdraft on a weekend where they all love to compete.