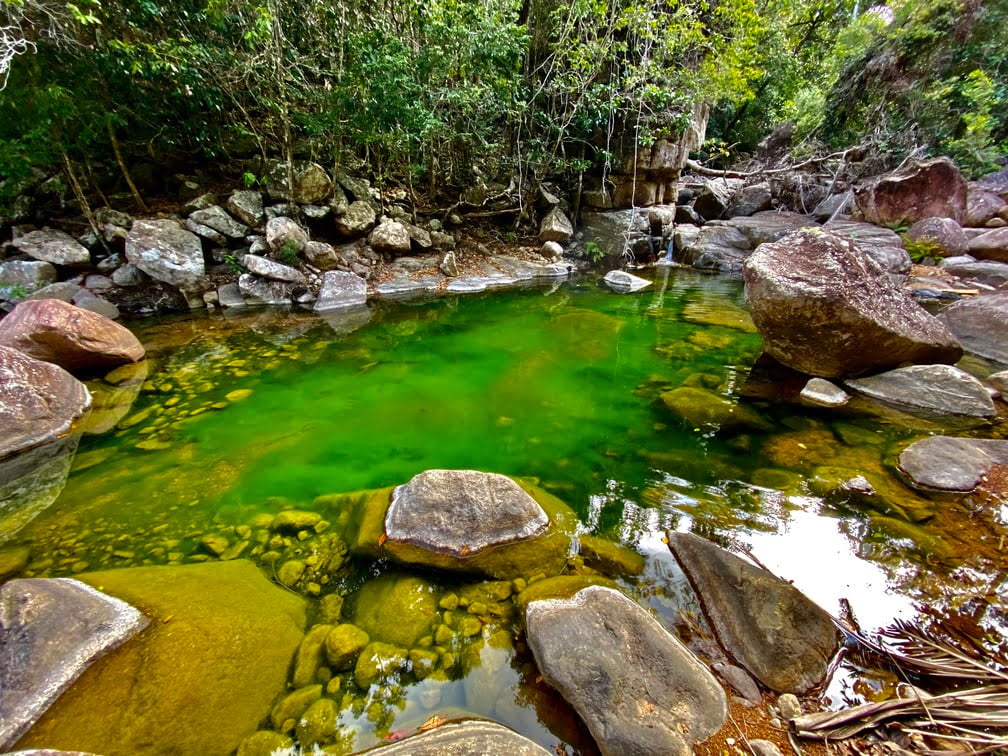 On a recent two night camping and trail clearing adventure in the Paluma Range National Park, Michael Mohring and I have again tackled some of the most remote, dense, overgrown leech and march fly (Tabanidae) filled rainforest terrain to continue in our efforts to re-open a section of the PRB (Paluma/Rollingstone/Bluewater) Track between the Rollingstone West Branch (RWB) and Ollera to allow us to take group hikes up the RWB, along the PRB & out via Ollera.

Our trail is now taped from Rollingstone, all the way up to the headwaters of the RWB, then onto the old PRB Track.

From the PRB we have cleared and taped a diversion to Banana Creek/Banana Pool to ensure we have an accessible camping and water point along the way, and….

…..we are now 170 metres from 3 Ways – from 3 Ways we will be tantalisingly close to Ollera Creek and the realisation of our goal, having cleared past 3 Ways Creek late on Saturday and started clearing the steep incline to 3 Ways!

This was another fantastic camp out in the upper reaches of the Paluma Range National Park. The weather was perfect and believe me, this is a really special place to witness first hand!

The highlight of this trip for me was the amazing birdlife and bird sounds that accompanied us over the weekend. I captured recordings of the Eastern Whip Bird (Psophodes olivaceus); their harmonious chorus was a treat for our ears as we set up camp at Banana Creek Pool Friday evening, as well as on the return trip down the RWB on Sunday.

Getting the name from their distinctive and resounding whip crack duet they perform (other names Stockwhip Bird & Coachwhip Bird) they are mainly found in wet gully & wet Eucalyptus forests, rainforests, heaths and dense bush land of coastal Eastern Australia. Ranging from south of Melbourne to just north of Cairns these birds are shy, elusive and well camouflaged, and although often heard, they are rarely ever seen. There is also their smaller more olive/grey cousin the Western Whipbird who has 5 main populations in SA, Kangaroo Island, the western Victorian border & parts of WA.

The male and female Eastern Whipbird are similar in colour and size with a black head and crest, back of body, wings and tail olive green, under cheeks broadly white extending on to their throat, centre throat & breast black grading to mottled white on belly and dusty olive green on flanks and under tail which has white tips. They have a red/brown eye, feet & legs and a black beak.

Established pairs hold permanent territories of about 5-10 hectares where they, with their young of that year, feed actively in the litter on the forest floor. They fly/hop with their tail fanned, foraging mainly on foot throughout the day turning over leaf litter with their powerful feet to feed on a wide range of insects, larvae and small crustaceans. They will search through shrubberies & fallen logs all the while calling to each other.

Most noted in the wild for their amazing antiphonal “whip crack” song which the male initiates with a long whistle swelling into a drawn out crescendo in the same pitch ending with a swirling upsweep, the “whip crack”. The female responds at once with a few sharp “choo choo”. Both male and female combine to produce this song antiphonally, call and answer sequence, to signal their territory and to identify the caller’s position in this way keeping in touch as they forage up to 30 metres apart through the dense forest underbrush.

The male’s song is one of the most extraordinary and beautiful in the bird kingdom.
“It involves a pure tone that ascends or descends extremely rapidly across a broad spectrum. It is possible that this note is difficult to perform and the females favour males who are capable of executing this difficult note. (http://www.wiresnr.org/Easternwhipbird.htm)

After hiking in late Friday, we set up camp on dusk close to Banana Creek Pool at what Michael Mohring (Mickle) now calls “Cheese Island Camp”, as it was the first time he bought cheese along to eat with his crackers over the campfire! After a Friday evening feast of steak wraps, foil potatoes (with butter!!) in the coals and a glass of red, we hit the hammocks!

Saturday morning saw us up early to tackle the incline from Banana Creek to the PRB and find the point along the trail where we had finished clearing on our last trip in July.

It was a long, arduous day. Clearing this type of thick, wait a while (Calamus muelleri) filled rainforest terrain with two people is a task in itself, not to mention that we are totally reliant on GPS navigation and compass to stay on what was the old PRB Trail. Other than the odd marker here and there, the trail is totally overgrown and close to impossible to see, due to the destruction caused by Cyclone Yasi in 2011.

We were eaten alive more than usual by the pesky March Fly’s (aka Horse-Fly’s) and leeches. This is the first time I have seen March Fly’s this thick in the upper reaches of the rainforest. The rainforest floor was littered with ticks – I had to have one removed days later. The hiker and explorer should always be wary of ticks and have themselves thoroughly checked after each adventure.

In total, we cleared nearly one kilometre of trail – this doesn’t sound much; but in this terrain it’s not unusual to average 50-100 metres/hour at times, sometimes less.

We were back at camp on dark for another well earned feast of sausage wraps, foil potatoes and licorice chocolate! We really do manage to eat well on these remote bush camps, mainly because we aim to carry down as less as possible!

We were up early on Sunday to hike out – The next camp should seal it! Stay tuned & we look forward to sharing what will be one of our regions most beautiful creek line & historical hiking adventures with you all soon when we have finished this mammoth project! 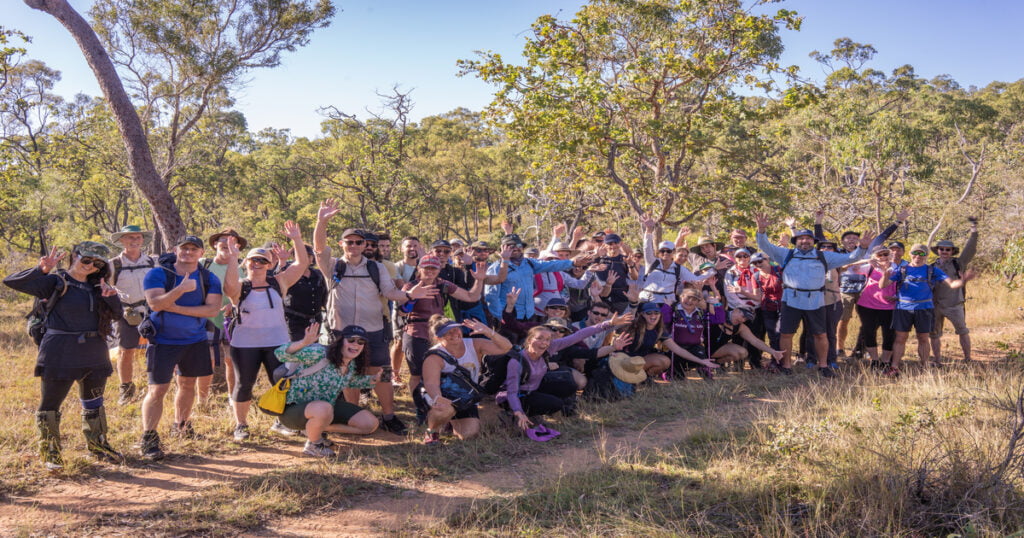 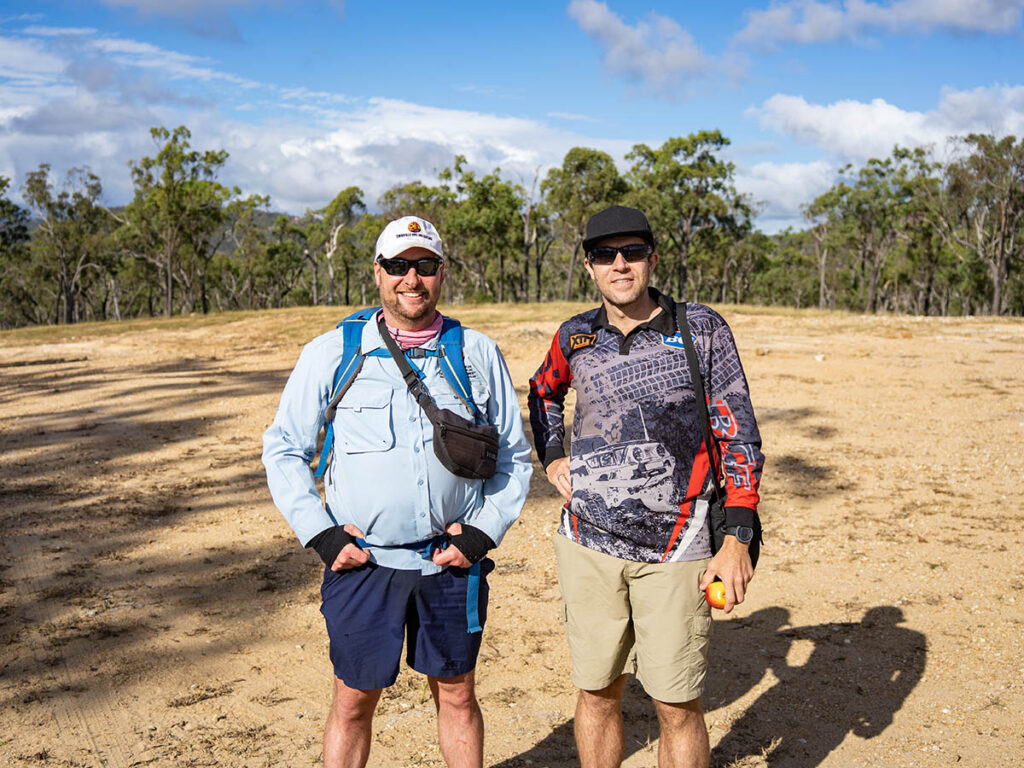