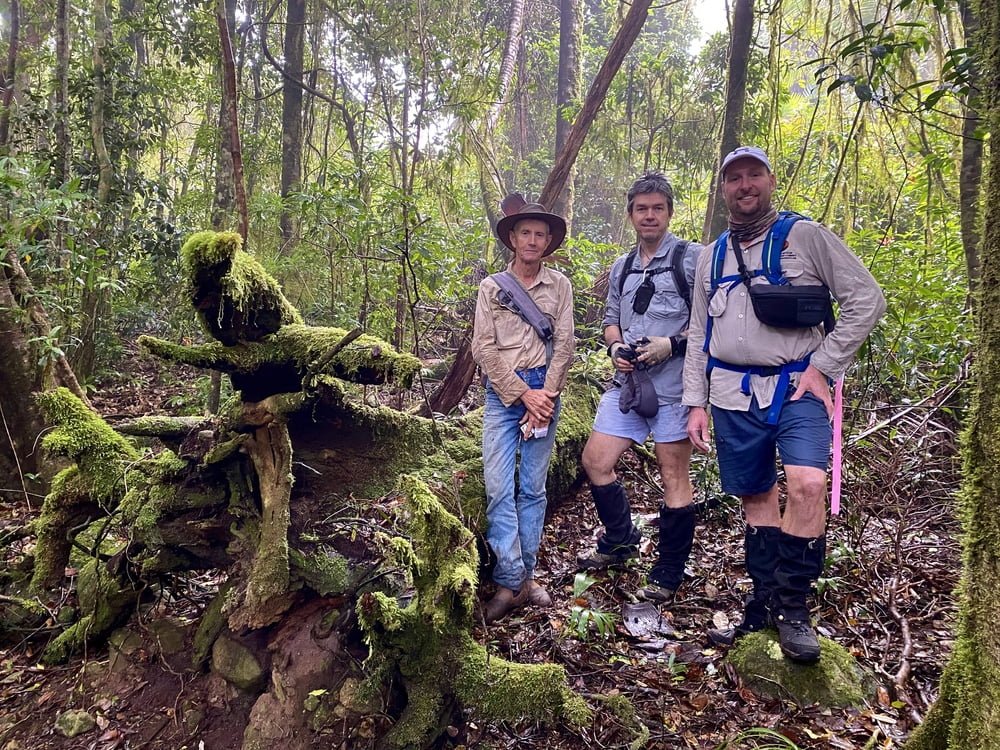 Who would get up at 1AM in the morning, undertake a trackless, nearly 17-hour hike through unknown terrain up and down the slopes of Mt Elliot, even knowing there was no prospect of a view from the top. Well TSV Hike and Explore would of course. If its there, we have to explore it.

In March this year, three of us summited Mt Elliot, at 1218m, the highest peak in the Townsville region. Whilst this in itself was the attainment of a long-held goal, it only served to fuel a deeper desire to explore more of the summit area and high terrain above 1000m, an area that has been visited by so few people.

The summit area above 1200m is ~1.5km long and then drops down to 1000m, following a flat but narrow, 6km long ridgeline to the Shoulder at 1022m. From the Shoulder, the mountain drops steeply away on all sides, feeding multiple tributaries of St Margaret, Major and Spring Creeks. These summit and ridgeline features are strikingly evident on topographic maps, capturing our attention and imagination, demanding that we challenge them. So it was that 4 of us, drawn by the calling of the mountain, traversed the summit to the Shoulder and down St Margaret Creek to our starting point. Michael and I had planned this for some time. Paul, a local grazier at the base of the mountain, and Fabio were late joiners, also captured by the lure of the mountain peak towering over the land they worked every day. (Our hiking buddy Debbie Lee, had to withdraw that morning, not feeling well)

This was a true adventure, going to places we had not been and for which there are no descriptions or track notes. Using an early start for insurance, we left home at 2AM and by 3AM had started walking from the eastern side of the mountain, crossing wild bush and following an unnamed but gently flowing creekline. After nearly 2hrs tracking through unfamiliar terrain in the dark, we arrived at the base of Alligator Creek Falls. After a brief stop, we were off again, attaining the top of the falls 30 minutes later, just as the deep orange glow of sunrise began to illuminate the wetlands of the Haughton floodplain in the distance. Sunrise above the falls with such a view amidst the cool morning breeze, is something very special indeed.

As glorious as the sunrise was, we had a huge day ahead and by 6AM were ascending the steep rockfaces of the upper falls, bordered by a line of kapok trees in full yellow flower that silhouetted the view, adding to its splendor.

The creek above the falls is still flowing strongly, providing innumerable waterfalls, cascades and rockslides. For 75mins, we followed the left bank rather than rock-hopping within the creek, before arriving at the point (@660m elevation) where we would leave the creek and begin the climb up the mountain slopes.

We filled our water bottles and leaving the creek at 0730hrs, ascended steeply through the rainforest. Though quad-bustingly steep, the forest on the upper mountain slopes is relatively clear and open under the canopy, with few obstacles impeding progress. Just a few metres shy of 1000m elevation, we reached one of the few landmarks on the ascent – a large hollowed out tree we nicknamed the Deb tree, after our hiking buddy Debbie Lee, from our March ascent. At least a half dozen people can stand under the central base of the tree and look 10-12m up to the sky through its hollowed-out interior (see photos).

Shortly after the Deb tree, we crossed a dark, rocky gully, the only one since leaving Alligator Creek. The nature of the forest doesn’t change until above 1100m, just before the summit, when the rocks and branches become generously endowed with mosses.

We attained the summit around 0930hrs, ~2 hrs since leaving the creek and <6.5hrs since we started hiking. This was 1.5hrs faster than our March ascent. As per our previous visit, we were greeted by wafting mountain clouds that raced across our vision through the forest. A lunch break here in the mountain mist, amongst moss-covered rocks and fallen trees is a very special feeling – our second such treat for the day. Although it never rained, we were a little wet from brushing the condensing moisture hanging off the mosses and tree branches, and the cool mountain air chilled us, so we decided to move on to keep warm.

We departed the summit ~1000hrs into terrain that we had no information about. The walking was largely favourable for the first hour, when we then descended from the summit area (mostly above 1200m) down to a lower ridgeline that remained just above 1000m. Once on this lower ridgeline, we started to encounter frequent weed and vine patches which slowed progress considerably. These have developed around fallen trees, mostly likely from Cyclone Yasi in 2011. Most of these weed-filled patches were not large but as the ridgeline was often narrow, they were often hard to go around. The 4 of us worked secateurs heavily to get through the dense weed/vine patches (see photos). In the last 1km before the Shoulder, they became less common and we were able to mostly enjoy open rainforest again.

From the summit to the Shoulder (1022m elevation) was 6.8km but took more than 4hrs of almost non-stop walking (and much time spent cutting). Being always around or above 1000m, we were accompanied by cool, wafting clouds for that entire time, arriving wet and with numerous cuts from the vegetation through which we passed. Like the summit, the Shoulder has no views. In fact, despite being on the high mountain all day, we had only a few glimpses between trees.

We departed the Shoulder at 1435hrs, following a descending 1.3km GPS line for the next hour to locate an upper tributary of St Margaret Creek @795m elevation. The tributary was narrow and choked with wait-a-while, thorny vines and spiky palm fronds. Another hour of furious secateur cutting and accompanying cursing followed. As the creek widened, these thorny impediments became easier to avoid and as we were losing altitude fast, we had many beautiful waterfalls to descend. We arrived at the top of Hidden Falls (400m alt.) at 1720hrs. Hidden Falls are high and in an impassable canyon. We had to descend by the left side, first by climbing upwards out of the canyon, then descending steeply down through casuarina/eucalypt forest to downstream of the falls (which were out of view upstream). This diversion took 15-20 mins of fast scrambling. From below Hidden Falls, and after a quick sunset swim, the fast descent down the creek to the rockslides only took <1hr (in the dark). Shortly after, we encountered Paul’s strategically–placed 4-wheeler, gratefully accepting a ride that saved us several kms of bush-bashing back to our car.

Hiking Mt Elliot offers such a different experience to the rainforests of Paluma. Paluma is well-tracked, with a road to the top and a strong sense of history. Evidence of human presence is common. By contrast, Mt Elliot itself has no roads, tracks or signs of recent human presence. Access to its slopes and uplands has to be won but the rewards are enormous.

Just 30 mins drive from Townsville, the area is underexplored but has so much to offer. Look out for more TH&E adventures here in the near future. 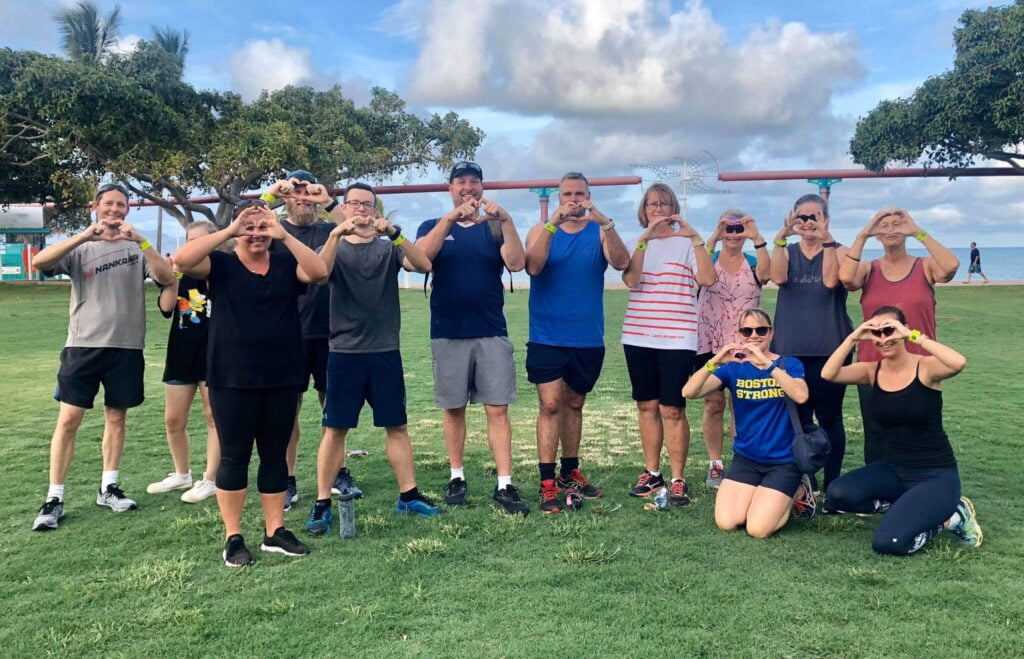