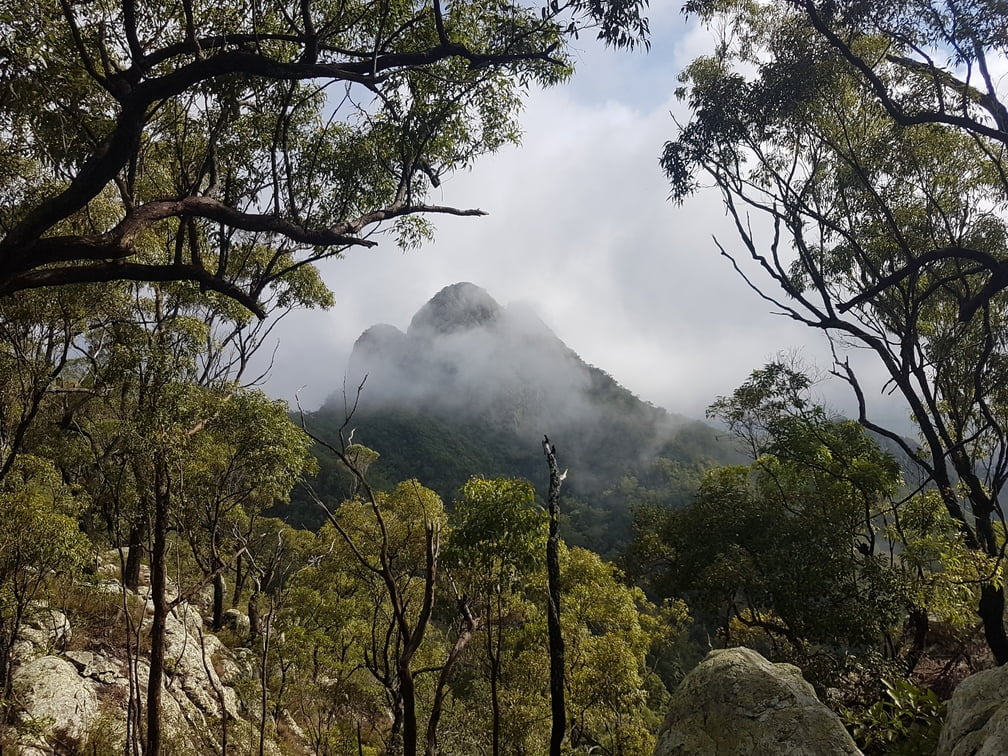 Towering over the Rupertswood area and readily visible from many Townsville suburban locations, especially when driving along the Ring Road motorway, the rocky spires of Frederick Peak and South Pinnacle stand as sentinels over a larger range of hills known as the Pinnacles, that extend back to Ross Dam and Herveys Range.

At 679m and 729m respectively, they are higher than Mt Stuart and more than twice the height of Castle Hill, and often they frame a magical deep orange sunset that enchants those fortunate enough to have a suburban view of them.  From atop, there is an unparalleled view over the Townsville-Bohle-Black River plains, Herveys Range, Bluewater hills and Ross Dam, and hence they are regular targets for Townsville Hike and Explore ventures.  The entire Pinnacles area has been acquired for a future National Park and is in exceptionally good condition, with minimal disturbance, few signs of human intervention and relatively free of weeds.

Whilst ascending Fred’s Peak is only a half day walk (South Pinnacle, at 6km in, is a little longer) done regularly throughout the year, traversing the Pinnacles from the Rupertswood side across to Ross Dam, a long, hard day hike with no trails and usually no water, is only an annual pilgrimage for Townsville Hike and Explore.

I awoke around 2am, just hours before we were due to start the hike, to a heavy storm.  I knew that rain would bring humid conditions to what already promised to be a long, hot October walk.  But rain also brings opportunities for new experiences in the bush, and so it was to be on this special occasion.

We began hiking towards Frederick’s Peak just after dawn. It was very humid, but the sun was not yet biting.  The views as we approached Fred’s Peak, shrouded in clouds, showed today was going to be different to previous hikes.   And so it was, as we ascended into the clouds, which accompanied us for the next hour.  The grass and trees were dripping with moisture as we pushed through on our way past the still shrouded Fred’s Peak and on to South Pinnacle.  In a deserved piece of timing, just as we arrived at the base of South Pinnacle, the clouds that had been wafting over and concealing Fred’s Peak all morning, began to clear, revealing a rarely seen perspective of Fred’s Peak to our waiting cameras.

We had a break at the South Pinnacle trig marker, enjoying the just revealed views. The descent down the pinnacles eastern slope was very steep and there followed an hours walk through wonderful eucalypt and casuarina woodland, where last years hike had seen a koala.  No such luck this year but just as the late morning heat and humidity started to sap our energy levels, we arrived at Cassie’s Gorge where awaited a flowing creek and 10m high waterfall into a narrow chasm, produced from the previous nights rain.  We cooled off and gratefully recharged in what was effectively rain water.  Oh thank-you to last nights storm.

A short hill climb had us heating up again, but in the next creekline, we encountered another series of temporary waterfalls gifted us by the storm gods.  Alas, this was our last water for the next 5 hours as we navigated a series of hills – up, down, up down, up down.  Each valley was still and stifling, but each ridgeline rewarded our ascending effort with cooling breezes and ever-shortening views of our long approaching destination – Round Mountain (a regular Friday evening favourite of Tsv Hike and Explore).  This was the pattern for several hours.  Although the heat had sapped our energy, and several of our group battled cramps, our spirits remained high and electrolyte and lollies (recharge pills) were liberally shared.

We had spent all morning above 500m elevation, but in the mid-afternoon, after lunching simply lying like kangaroos in the long grass under a sparsely shaded tree, each undulation saw us lose more elevation than we gained with the next ascent, and we gradually lost elevation.  The clouds had long cleared by the afternoon and the sun was biting.  After the aquatic gifts the storm gods had delivered earlier in the day, we dreamed and postulated excitedly about what fresh waterholes we might find when we reached the lowland creekline we intended to follow to the hikes end.

As wonderful as it was hiking through the long native grasses in the hills, it had its pitfalls – literally. The grass hid holes, rocks and logs from view, at times resulting in a style of walk more reminiscent of a drunken stagger in high heels.  This slowed our pace considerably, and we averaged <2km/hr.

Everyone’s ankles held firm but by the time we reached Round Mountain Creek, we relished the freedom of rock-hopping the attractive melaleuca-lined creek.  We passed numerous small, shallow rocky waterholes, but being exposed to the sun all day, the water was very hot and unpleasant.  After a km or so, we arrived at a small gorge-like rock feature that furnished a narrow deepish pool, complete with resident turtle who in its rush to get back to the water, up-ended itself.  A quick rescue of the flailing turtle, and we all shared its cool waterhole home together.  By now, the sting had gone out of the days heat and we had recharged ourselves for the several km of flat walking back to our waiting vehicles.  Here we were walking in the shadows of Round Mountain, seeing it from a different angle to our usual approach of this small, notable peak.  We had seen it regularly for the last 4-5 hours, gradually becoming more prominent as we closed the distance and now here we were, checking out new angles of approach and exploration from beneath its SW flanks.

But the splendours of the day were not yet over.  Just a few minutes short of finishing, as the day was fading fast, we were received a short, calm rain storm which as we stood at our cars, left us with a clear rainbow that was so close, we thought we could keep walking to its base.  Here, under the rainbow, just before dusk, and flanked by our friend, Round Mountain, we took our obligatory hike completion photos, reflected on our achievement and praised the storm gods that had blessed and enriched this years Pinnacles Traverse with such wonderful experiences.

The moral of this story – don’t forgo your planned hike, just because it rained the night before.

The Pinnacles Traverse is a long hard off-trail day hike, with (usually) no water.  It requires a car shuffle, private property access and 6 litres of water/person.  Look out for next years annual traverse (which will probably be in a cooler month).

Stats for the day – 22km (mostly off-trail) distance covered over nearly 12hrs and with ~1100m total elevation gain.  We were blessed with numerous views all day, wafting clouds, two waterfalls, two swims, one rainbow and made friends with a turtle. 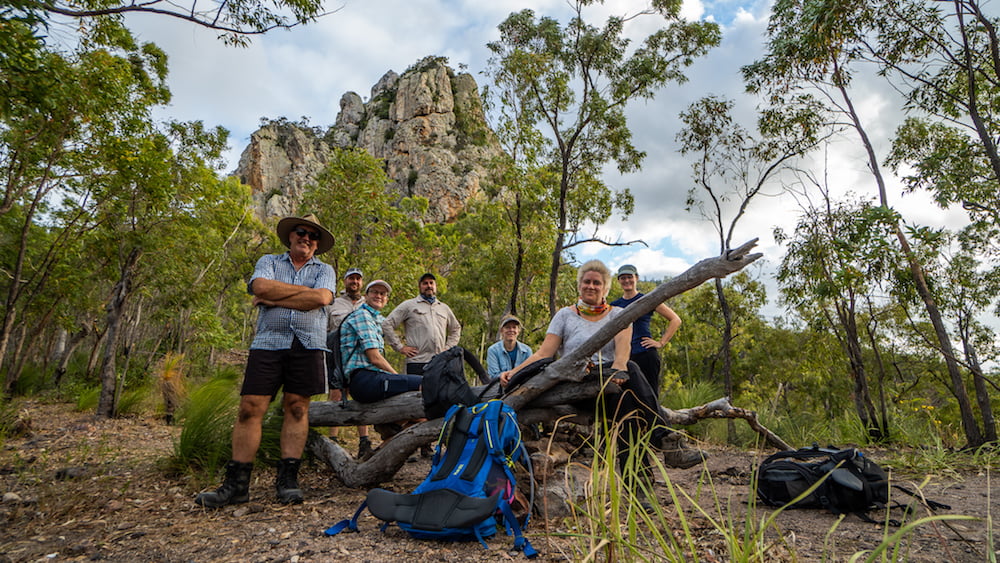 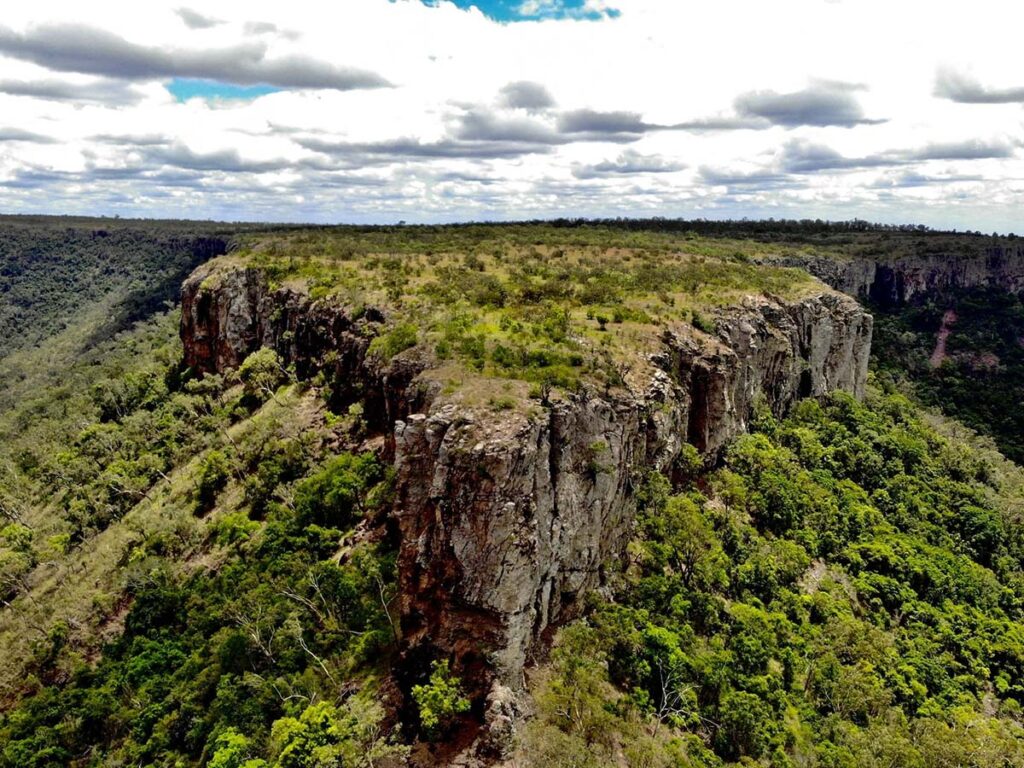 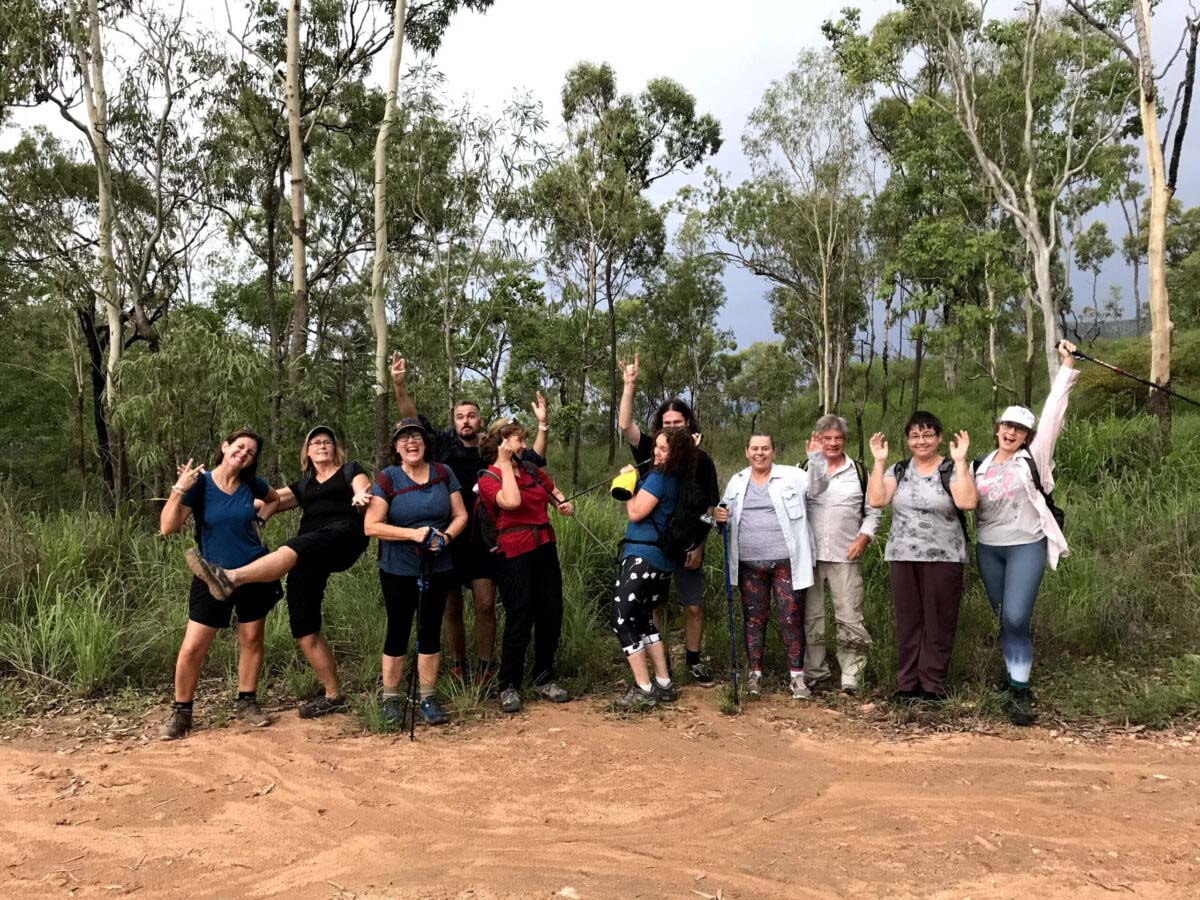