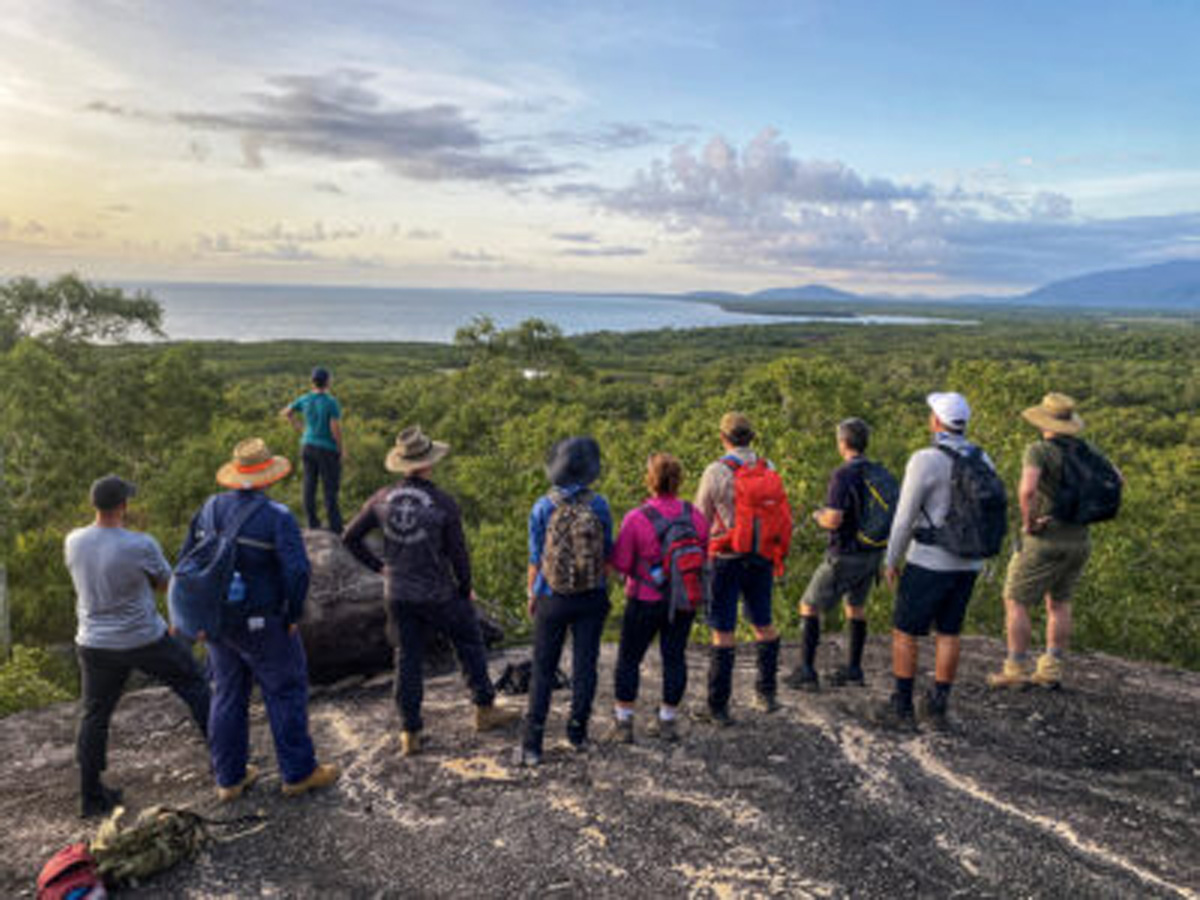 You can see it from the Strand on Townsville, and from atop Castle Hill – Cape Cleveland, and its tallest peak, Mount Cleveland, is just 22km due east of the city centre.  Stand on the beach facing the ocean or at any number of similar vantage points in Townsville, and look to your right, the rocky ranges of the Cape loom large across the flat expanse of Cleveland Bay.  Townsville Hike and Explore (THE) have explored the eastern beaches and the western ridgelines of Cape Cleveland several times in 2021 but have not visited its highest mount in 2 years.  With a predicted top of 33 degrees Celsius, it was a little warm, even for late March, but 11 hikers ventured out to summit 559m high Mt Cleveland.

There is no path or marked track to the top but by following ridgelines, with sweeping views as regular companions, navigation was not going to be hard.  Plus our trip leader Michael had trodden this path before.

Right on dawn, we parked ~1km before the AIMS main gate, where there is an open dirt patch in front of a fence gate.  From there we crossed the road and entered the long grass which was taller as ourselves and often flicked our faces as we weaved through it.  Immediately, the call came that we should of done this hike after a fire.  Oh well.  Michael led the way, the rest of us benefiting from the flattened grass path he created.

We followed Michael for several hundred metres before we started to gain elevation.  There were a few open rocky patches that gave brief respite from the long grass but as we left the flat terrain, we started to feel the effects of the sun, the extra exertion of the elevation gain and the loss of tree shade conspiring to wipe out the cooling advantage of our early morning start.  We were soon all sweating as the sun showered upon us.  At about 120m elevation, one of our party realized this day wasn’t for him and turned back.  We appreciated that he wisely made this decision early on when a return to the car was still possible.  A bit further on in time and such a return would have been inadvisable.  Two other capable group members accompanied him to the cars for safety and agreed to catch us up later on.

By 0700hrs, we were all sweating profusely.  The long grass and thatched dead grass on the ground hid from view various rock, fallen timber and pothole trip features which made progress slower than usual.  This was going to be a hot and slow-moving day.  At ~300m elevation we stopped to take in sweeping views across the Haughton River mouth, Bowling Green Bay and across the salt flats towards Mount Elliot – views that would revisit us from different angles and elevations throughout the day.  We stuck to the ridgeline, even though immediately on our right was a large, heavily vegetated gully system that temptingly offered cooling shade.  No expansive views to be had in a shaded gully though, plus Michael had followed that gully once before and fell into a body bath of stinging tree.  He wasn’t going back into that gully again – I don’t think ever.  By 270m elevation, we were higher than the gully system anyway, which was now below us, so we veered to the right, across its head, and continued on the ridgeline – more morning sun streaming right onto us with little relief bar an occasional light breeze.  At >400m elevation, 2.5hrs after we started, we came upon our first decent shade and sank into a patch of delightful ferns (though admittedly a sparse patch of ferns interspersed amongst spear grass but compared to the open grass of our previous 2.5hrs, they were delightful by comparison). From here, the gradient which until now had been steady, got steeper and rockier, but recharged from our break in the ferns, it only took us another 25 minutes to reach the 510m high false summit of Mt Cleveland.  Doesn’t every decent mountain have a false summit that fools you into thinking you have made it, then challenges your spirit when you discover there are further peaks to be ascended.  Well at least Mt Cleveland has only one of these false summits.  This one is a beauty in its own right – possessing a shaded forest of >20m high palms, the ground floor crackling as we walked over the abundant fronds underfoot.  We took a break in this forest, looking skyward at the canopy of giants.

From the palm forest we could see the summit of Mt Cleveland but between us and it we had to descend 40m, then gain a further 90m elevation.  Doesn’t sound like much, but given our exertions till now and the tricky terrain which was now steep and strewn with large boulders, it took us 45 minutes.

The summit of Mt Cleveland was only 3.5km in walking distance with a 630m accumulated elevation gain but took us 3hrs40mins.  The summit is marked by the broken remnants of a trig survey point amongst a pile of large boulders and vegetation, and whilst the summit itself has no views (obstructed by the vegetation), there are magnificent, expansive views from an exposed boulder just 15m away.  This flattish boulder was easily large enough for our group photo and provided unbroken views arcing from the beautiful blue of Bowling Green Bay, the wetlands below us, Mt Elliot to the west, and the city of Townsville, even to the CBD – an unbroken arc of >100 degrees I’d estimate.  Time for the panoramic camera shot.  From other vantage points, we could see Magnetic Island between the trees and the ocean to the east.  A little known fact is that scientists believe that from just 4000-3000yrs ago, the Burdekin River disgorged into the ocean at the Haughton River mouth rather than its current location in Upstart Bay, far to the south.  At that time, Cape Cleveland may have been an island.  That means that the Traditional Owners of this land, from these same slopes, would have looked down on a very different view to what we are seeing now.  Take a minute to think that through.

Back to the present, the summit was a little cooler and flanked with large boulders which created a myriad of shelter options.  With no flat ground, you couldn’t sleep up there without a hammock, though you could shelter under these boulders.  The summit vegetation was a jumbled mix of casuarina, eucalypts, various other trees and grass trees but it did not possess the palm trees that had so enchanted us at the false summit, and to my mind, it lacked charm.  Lucky it has great views to make up for that.

Apart from distant views of oceans, wetlands, mountains and the city, we also carefully studied the ridgelines immediately (1-2km) to our west.  Here we could identify exposed boulders and rockfaces that would provide great views, and gullies down hillsides, thick and shady with dark green vegetation.  On a previous hike down one of these gullies, Michael had come across a swimming hole.  Oh how we could of done with that on this hike.

A sea eagle enhanced our summit experience by soaring repeatedly (and only rarely and briefly flapping its wings) above the valley between the summit and the western ridgelines, at approximately our elevation.  Our two separated colleagues who had accompanied our friend to his car, caught up to us at the summit, dripping sweat after their extra exertions, but otherwise in high spirits.  The magnificent views quickly recharged them.  Kudos to Brad and Joseph  for your extra efforts in helping a friend.

After a long lunch, we began our descent along the same path we had ascended.  In contrast to our 3:45hrs ascent, we descended in a little over 2hrs, mainly because we hardly stopped for any breaks on the descent.  Was it the promise of car air-conditioning and cool drinks, or the Cowboys playing the Broncos that afternoon that motivated us?  On the descent, I realized just how much of the hike had been accompanied by expansive views.  On the ascent, we often had our heads down and our backs to the views but on the descent, I got a new appreciation for just how abundant the views were, all the way down to the last 20m of elevation.  I took heaps of photos.  Back at our cars, we congratulated each other on a big effort on a hot day, with much of it spent on exposed ridgelines (although at just over 7hrs total, this was a short weekend hike by our standards).  I spent the rest of the afternoon feet up watching the footy, consuming liquids and calories in various forms.

Whilst navigation wasn’t difficult, the terrain was tricky and ankle sprain risk high.  You would want to have reasonable hiking experience and fitness to attempt this hike.  It would be much easier to move through this terrain after a fire, when the potholes and hidden ankle traps are more visible.  We also had mobile reception the entire hike, which enabled us to keep in regular touch with our separated companions. 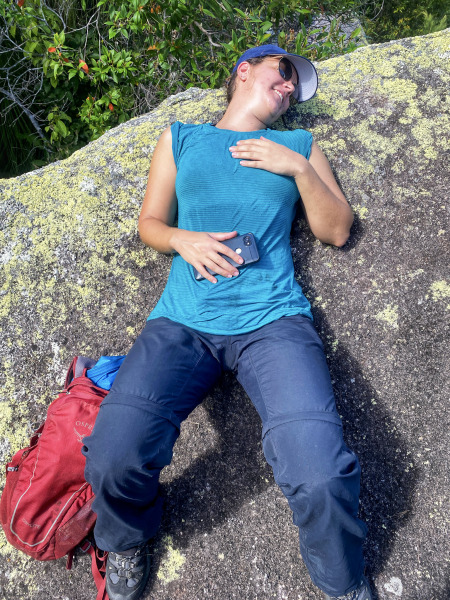 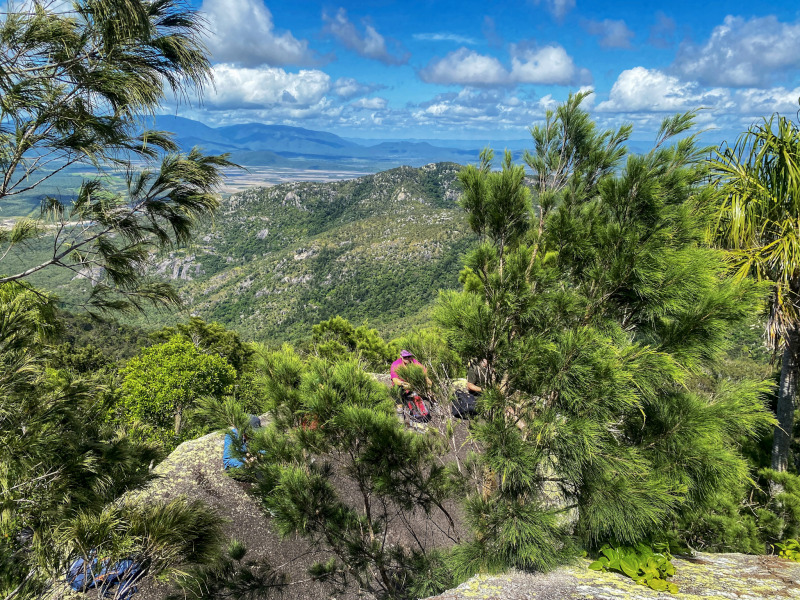 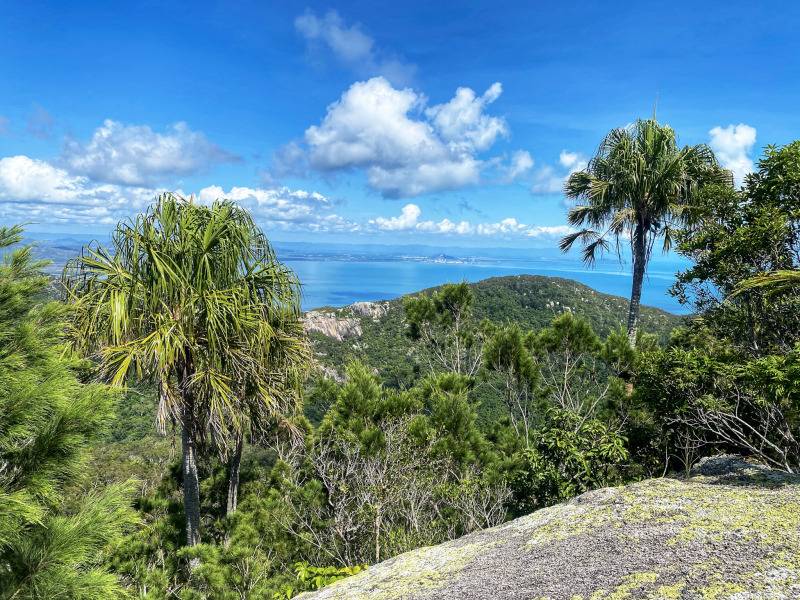 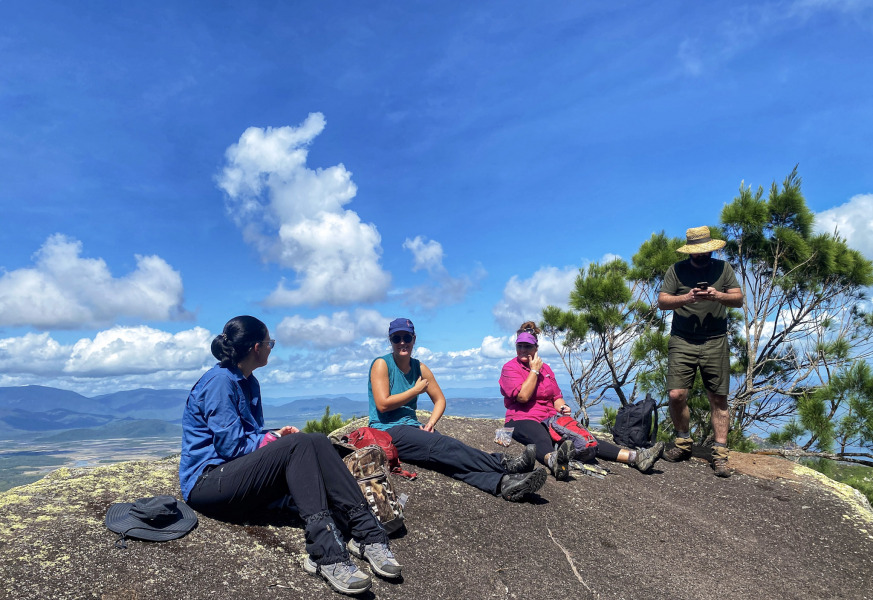 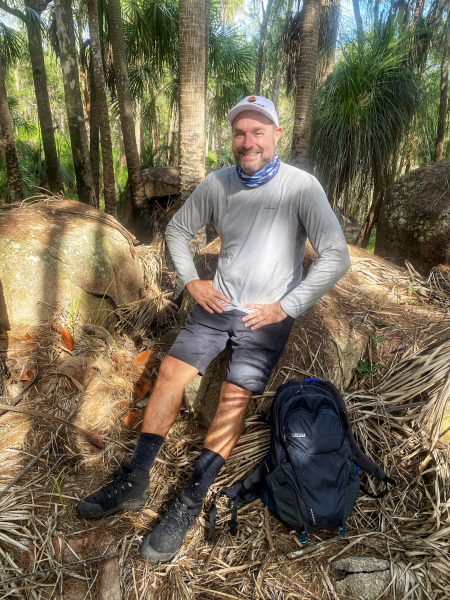 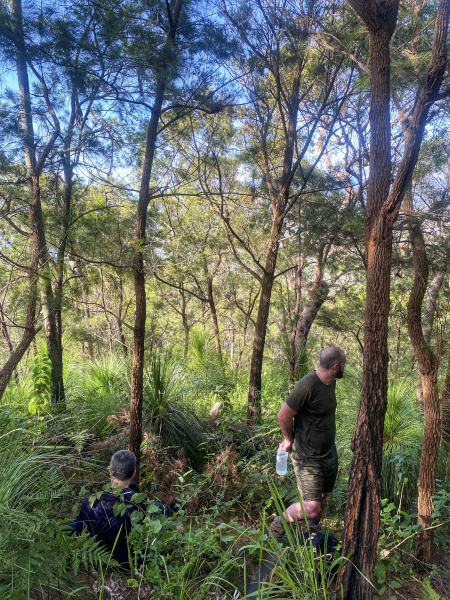 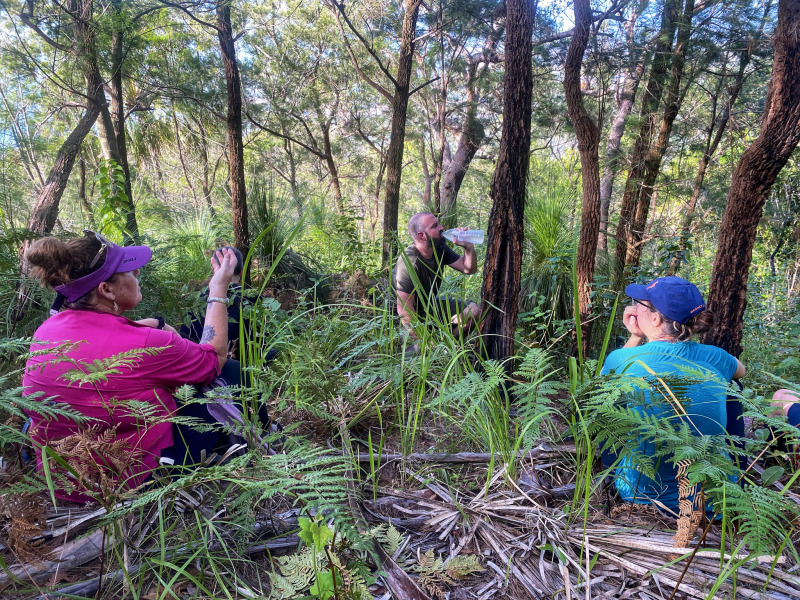 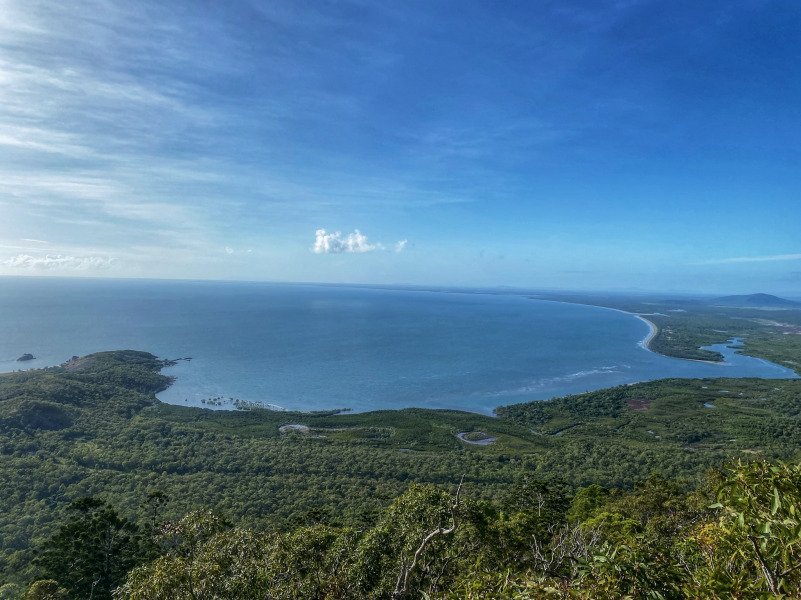 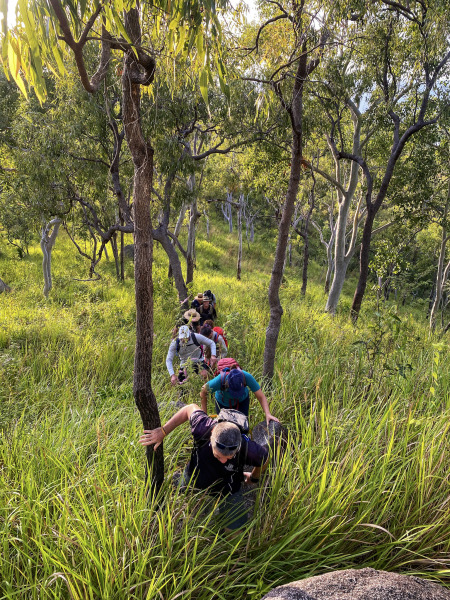 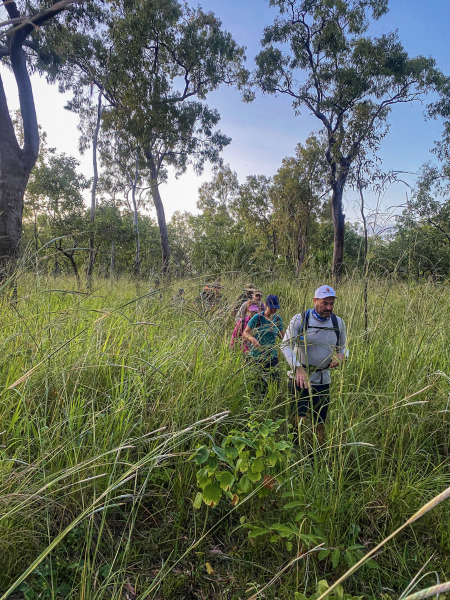 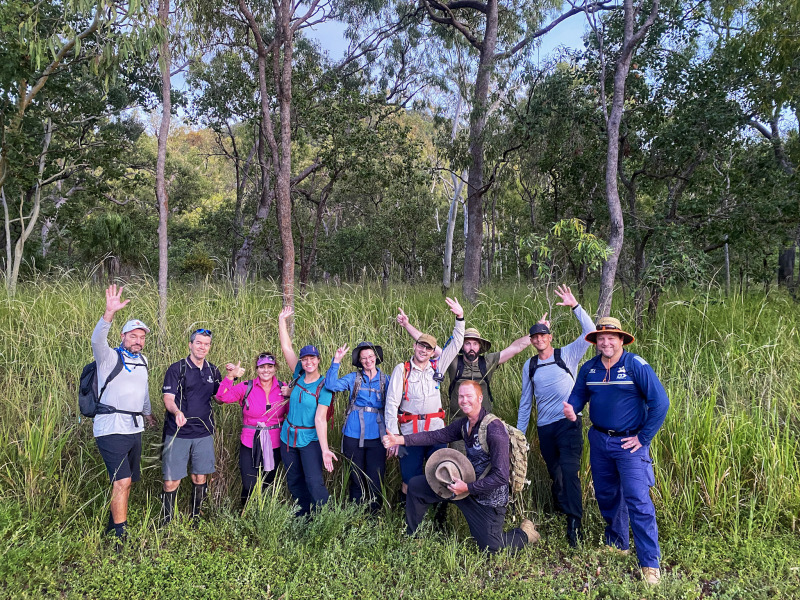 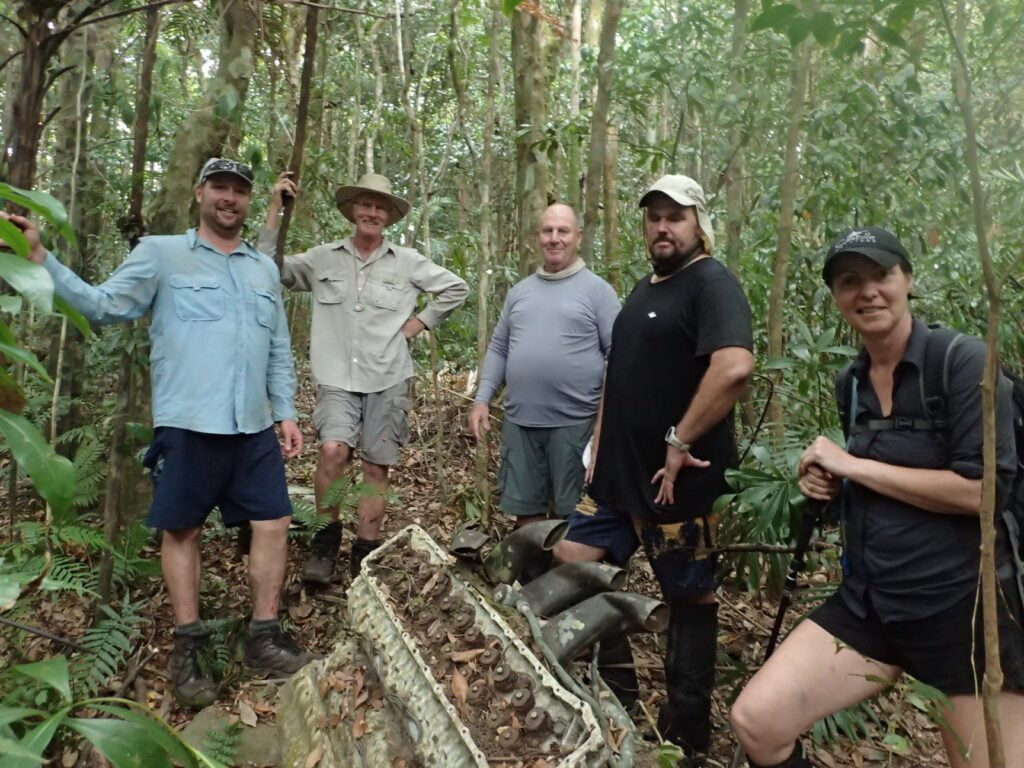