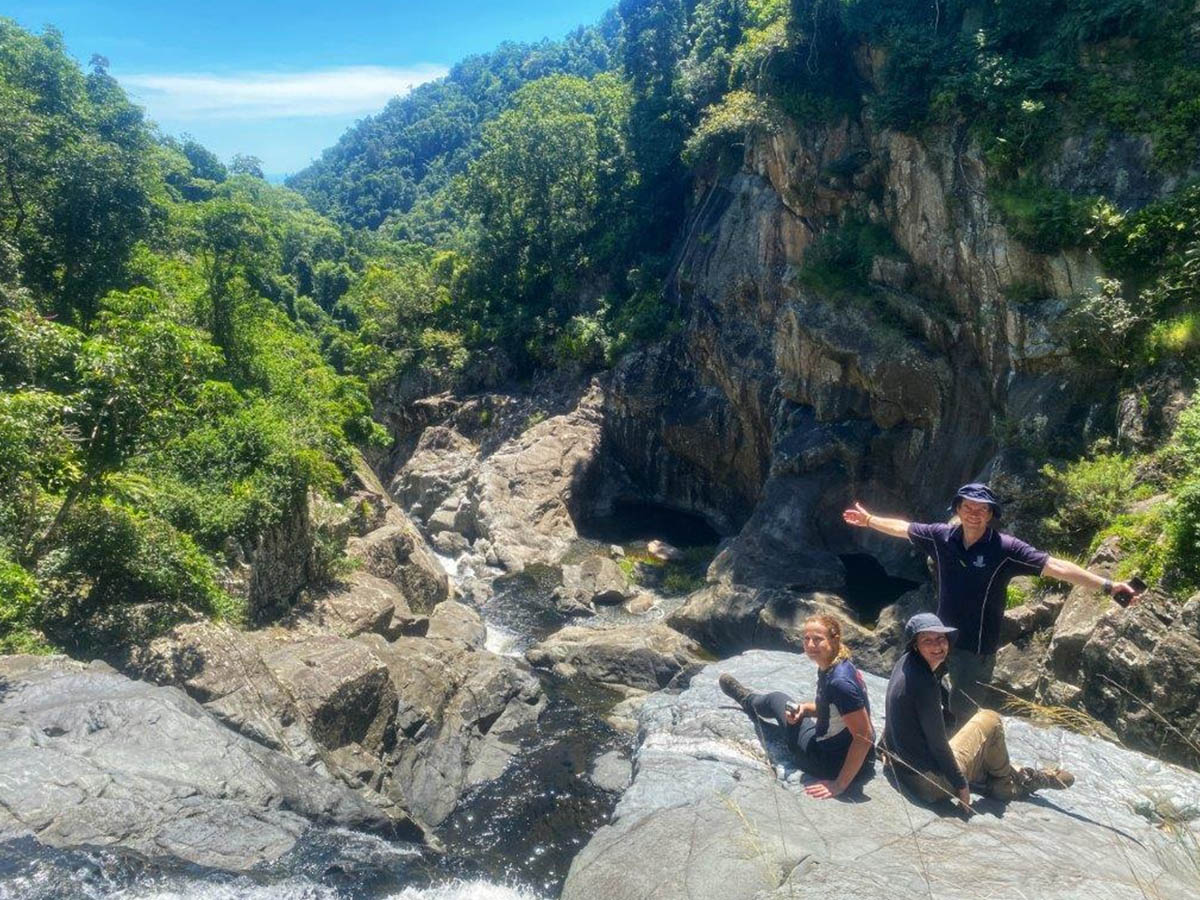 The Black Hole on Waterview Creek (-18.884S 146.114E), some 2.3km upstream of Jourama Falls, has become a must-do for many local weekend adventurers.  However, the imposing steep cliffs that surround the waterfall and deep swimming hole on all sides, that provide the vertical framing that makes the Black Hole such a magnificent sight, also mark the end of upstream passage along Waterview Creek.  Hundreds have made the trek, arduous enough in itself, to the Black Hole, but few have ventured beyond.

As you sit at the Black Hole, gazing upwards, one can only wonder what lies beyond those vertical walls.   Or on the other hand, you can grab a satellite image and quickly realise that another, even larger, and more tightly confined canyon-like waterfall lies immediately above the Black Hole waterfall.  If you are like myself, seeing this imagery stirs an irresistible urge to go ‘Beyond the Black Hole’.  And so it was that four Townsville Hike and Explore adventurers determined to explore beyond the Black Hole, noting that to explore upper Waterview Creek we would need to ascend/divert around both waterfalls, and we had no prior knowledge of if this was even possible.

A pre-dawn drive up the highway, had us starting from Jourama Falls carpark at first light in the morning.  Although we were able to ascend to the top of Jourama Falls early enough to avoid the heat of the day, even then, the early morning breeze, slight as it was, felt notably warm, indicating that the ‘feels like’ temperature, was going to significantly exceed the actual predicted temperature for the day.  We made the top of Jourama Falls within an hour and didn’t linger as we began our drive toward the Black Hole.

Excited about our plans for the day, we skipped up the creekline quickly.  We almost had a medical situation shortly after we started when I put my hand on a tall tree and it gave way, crashing down onto Mila’s head, who was sitting below.  We gasped and held our breath, awaiting the outcome, but fortunately, the tree trunk had broke in two on Mila’s head and not the other way round.  After a few relieving laughs we were on our way again but this incident spawned many jokes throughout the day.

Normally the Black Hole is our days destination, but today, we planned it to be just our mid-morning target.  And thus, on plan, we arrived at the Black Hole by 0930hrs, just over 3hrs hiking from our car.  A quick swim and feed and we began the adventurous part of our day – ascending the Black Hole to see what lay beyond.

We were not personally aware of anyone who has ascended the Black Hole, so had no advice to follow and were making it up on the spot.  It is quite obvious that you cannot ascend the immediate falls area, being vertical cliffs on all sides.  So we backtracked down the creek to the entrance to the link track that connects the Black Hole to the Paluma-Jourama trail.  Almost immediately upon entering that link track, we noticed a steep drainage line that although full of loose green-tinged rocks, offered a vertical ascent unobstructed by vines and other vegetation.  We gained valuable elevation up this drainage line, then exiting to the right along a similar-looking tributary.  Once that drainage line had petered out, we had to enter the forest.  Here we encountered wait-a-while, several patches of stinging trees and a nest of ants that gave the most painful ant bites I have ever experienced.  We could hear, but not see the Black Hole waterfall down below us, so were judging our position relative to the waterfall.  Once we had gained what we felt was sufficient elevation, we began moving laterally and very carefully across the steep hillslopes, an exercise not without apprehension, given we knew there were cliffs into the gorge below the vegetated slopes we were traversing.  A single small gap in the forest, perched above a vertical drop, allowed our only glimpse (and photos) of the waterfall above the Black Hole and enabled us to judge our upstream progression.  The magnificence of the sight between the trees and vines raised our excitement about what was to come.  Immediately after our glimpse of the waterfall, we followed along the base of several house-sized boulders.  I’m glad our route chanced upon the base of these and not higher up as they would of required a diversion of their own to get around.  We then crossed another dry drainage line and only had to descend a short distance to exit into the creek only about 20m upstream of our target waterfall.  All up, it had been 1hr exactly since we left the Black Hole, but a taxing and slightly risky hour.

It is difficult to describe our feelings of elation as we exited the forest above the waterfall.  It certainly felt other worldly, rather like the first time I exited the forest to set my eyes upon the Black Hole itself.  By comparison, I would say that standing upon the top of this waterfall (and yes you can stand at the lip of the vertical drop), looking down from the rainforest-topped cliffs into the contorted, vertical-walled canyon below, and from this high vantage point, also being able to see the green and blue hues of the coast in the distance, is a significantly superior visual and jaw-dropping experience to arriving at the base of the Black Hole.  Given its framing of sheer vertical walls, I will refer to this location as Waterview Creek Gorge.

As soon as we exited the forest, we embraced the exhilaration of the moment, dropping our packs and letting out repeated exclamations of awe as we excitedly leapt across the rocks taking in the views from multiple angles.  We crept closer to the waterfall edge and fortunately the rocks were dry and not slippery.  There are abseiling anchors bolted into the rockface at the top of the falls.  This is an unfortunate reminder of the prior presence of others, but what a thrill that would be, descending down into the canyon.

We followed the creekline for a few hundred metres upstream before settling in for lunch and another swim.  The creekline there is infilled with rocks and large boulders that appear more strewn-about-the-place than below the gorge, and sections of the creek have instream vegetation such as Lomandra grasses and a few Callistemon trees, which are rare below the gorge.  In my opinion, that section of creek is not as beautifully scenic as the creekline below the Black Hole, although Waterview Creek goes for many more kilometres upstream, so I wont pre-judge its whole length which I am sure holds many scenic delights.  After our swim, we left the creeks northern bank, and ascended a nearby ridgeline to around 620m elevation, but were greatly slowed by its steepness (pulling ourselves up by tree roots over sloping rock faces in several places) and eventually beaten back by the density of tangling vines and wait-awhile.  After an hour of fighting that with no reward, we decided it was prudent to return (which involved some downhill butt-sliding) to the creek and follow our previous route home.

Now that we knew the route, the return journey to the Black Hole was a little quicker, at 45 minutes.  We were able to avoid the stinging plants on the return journey but Mila slipped and fell into the ants nest that had bothered us on the first leg, resulting in a painfully bitten backside.  We also found a very old and badly beaten up saucepan along this route, reminding us that others have been in this area well before us.  We attached this ‘historical artefact’ to Mila’s backpack, and it sounded just like a swiss cow bell as it banged over the rocks, all the way home.  At least we always knew were Mila was.

After another swim at the Black Hole, the return journey to our car from there took 3hrs and the exertions of the hot day had us increasingly dependent upon refreshers from the creek.  Towards the end, these were taken with full clothes, boots and all.  It was only when I returned home that I realized how hot it had been.  Lucky we had been hiking a shaded creekline most of the day, but despite drinking many litres of water (which is unusual for me), I was still clearly dehydrated all the next day.

At days end, we had hiked for 12hrs, covered 16km and 884m total elevation gain.  We had spent 3.5hrs in total bashing through untracked terrain and had 3 snake encounters, 2x wasp bites, numerous ant bites, 2 x brushes with stinging trees (and several near misses) and a large lump on Michael’s shin after a fall.  We also saw two large banana trees along the creekline to the Black Hole, both with developing bunches of bananas on them.

It is interesting to reflect upon how my feelings for this creekline changed within an instant and forever, upon first exiting the forest above the gorge.  Like a 50-foot steel wall that you didn’t think about breaching, the Black Hole was always an end point to a hike, with a seemingly unknowable beyond.  I would sit at the base and think, ‘this is as far as we go’.  But now, that psychological barrier has been torn down.  I can no longer think of it as barrier or an end point – there is a reachable beyond.  To me it is now a staging post on a larger upstream journey.  Beyond the Black Hole is within reach and it opens up a long length of explorable creekline into the Paluma uplands and the prospect of connecting with the nearby (and at least partially overgrown) Jacobsen’s Track that historically connected Hidden Valley with Ingham.  Breaching a barrier has now opened a world of possibility.  Whilst the journey has expanded my purview for this creekline, I hope I haven’t ruined the mystique of the Black Hole for myself.  What will your thoughts be the next time you are at the base of the Black Hole?

On a serious note, the traverse beyond the Black Hole requires good fitness (>10hr return journey from the car park), ability to navigate through the rainforest and confidence traversing steep slopes.  We were fortunate the soils and rocks were dry and not slippery, due to no recent rain.  I also feel we were fortunate in finding an achievable path without too much fuss – others might not be so lucky.  We did not mark our route.